While it sounds like a cute nickname for children on Barney & Friends, it was actually a violent Jewish gang that ruled Detroit’s crime world from 1927 to 1932.

The Purple Gang. While it sounds like a cute nickname for children on Barney & Friends, it was actually a violent Jewish gang that ruled Detroit’s crime world from 1927 to 1932. The gang formed around the four Burnstein brothers and quickly expanded to include some of the most brutal and out-of-control men from Detroit and New York. They got their name from an aggrieved shop owner they often shook down, who commented to police that the men had “off-color” characters and were “purple like the color of bad meat.” 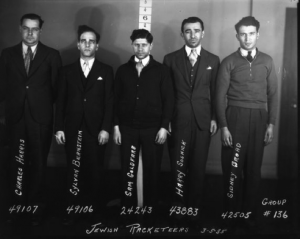 Though the “Kosher Nostra” only ruled for five short years, police believed they were responsible for at least 500 murders. Their propensity for violence earned them such a fierce reputation that even Al Capone, certainly no stranger to violence himself, refused to move against them even though they sat between him and the Canadian whiskey he sold. According to Jazz musician Milton “Mezz” Mezzrow who was familiar with both gangs, the Purples were “a hard lot of guys, so tough they made Capone’s playmates look like a kindergarten class.”

The Purple Gang had their blood-soaked hands in every type of criminal enterprise imaginable, but they were especially well known for bootlegging, kidnapping and murder. They were responsible for the Miraflores Massacre, which was the first known machine gun execution in Detroit. The police pulled more than 110 bullets from the bodies and the walls of the murder victims. Their audaciousness eventually caused their downfall, but not before getting them involved in the St. Valentine’s Day Massacre, the Collingwood Manor Massacre and the kidnapping of the Lindbergh baby. At one point, they even had a hit out on Joseph Kennedy, father of the future President, for running liquor through their territory.

The downfall of the Purples came in equal parts from their own hand and that of Sicilian mobster Joseph Zerilli. The Purples became increasingly brazen with their murders, both within their own group and without, because the police had been too afraid to arrest them in previous years. But with ample evidence left at their later crime scenes and at the urging of the public, the police began charging Purple members with murder. With many of the Purples in prison, Zerilli saw an opportunity to take out his competition permanently.

Zerilli was everything the Purples weren’t — patient, calculating and composed. He picked off the remaining Purples one by one, and because having their gang members turn up missing or dead wasn’t at all uncommon, they didn’t realize one man was orchestrating their downfall. The final and most notable execution was of the “Siamese Twins,” Abe Axler and Eddie Fletcher. The two men were inseparable and were often sent together to handle the toughest assignments. Their excessively violent behavior made them Detroit’s Public Enemies No. 1 and 2. In 1933, their bodies were found in the backseat of their car “side by side and holding hands...Each man had been shot in the face a dozen times.” The police believed their hands were intertwined post-mortem as a final act of disrespect from Zerilli.

Though their reign was short and their demise bloody, nearly a century later, the Purple Gang remains notorious. Their reputations alone assured they would be remembered (illustrated by their mention in the lyrics of Elvis’ Jailhouse Rock), but they were also notable for being the only all-Jewish gang of the Prohibition era and for their heavy influence on the formation of the Cosa Nostra in Detroit.