The Colorful History of The Beatles’ White Album

This year marks the 50th anniversary of the release of The Beatles’ album The Beatles. But to most people in world—music snobs excluded—it’s the White Album. Because it’s a white album. 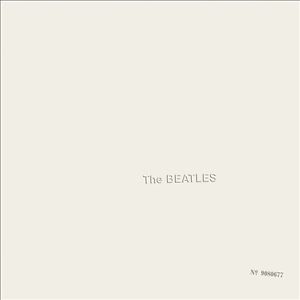 This year marks the 50th anniversary of the release of The Beatles’ album The Beatles. But to most people in world — music snobs excluded — it’s the White Album. Because it’s a white album.

Designed by Richard Hamilton, a friend of Paul McCartney, the White Album was meant to look completely different from the band’s previous album, Sgt. Pepper’s Lonely Hearts Club Band. That album depicts the band surrounded by more than 50 iconic people and a colorful garden peppered with psychedelic weirdness like a Fukusuke statue, a garden gnome, Snow White and a purple velvet snake. Hamilton’s original design for the White Album included the band’s name in black letters, along with a light green apple to reference The Beatles’ newly founded company Apple Corps, but these ideas were rejected in favor of a solid white cover with the band name embossed on the front.

As popular as the White Album is, there are many people who question why the band chose to make it a double album instead of a single, since the songs have little cohesion in sound or theme. And let’s be honest, there are a couple of duds (lookin’ at you “Ob La Di Ob La Da,” which went through 47 takes before making it on the album and was voted Worst Song Ever in a BBC poll). When Paul was asked in an interview why the band chose to release a four-sided, musically scattered double LP, he responded, "It’s great, it sold, it’s the bloody Beatles White Album, shut up.”

He’s got a point. Even with its flaws, it is still considered one of the greatest albums ever made. It showcases each band member’s strengths, and as the original album reviewer for Rolling Stone said, “The impact of it is so overwhelming that one of the ideas of the LP is to contain every part of extant Western music through the all-embracing medium of rock and roll.” Within one month of the release, it sold more than 4 million copies worldwide. Ringo Starr owned the first official copy of the White Album, number 000001, which he sold in 2015 for a cool $790,000.

A special anniversary release comes out Nov. 9, so if you know any Beatles fans, you’ve already got Christmas gifts figured out. The special release will include rare photographs, prints of handwritten lyrics — and most exciting of all for die-hard Beatles fans — the acoustic Esher demos.

The Esher demos are recordings the band made before the official White Album recording in Abbey Road Studios. The demos were made while hanging out at George Harrison’s house, and they include conversations among the band and friends, as well as John Lennon telling the story of “Dear Prudence.” The song was inspired by actress Mia Farrow’s little sister, who locked herself in her hut for three weeks while the band and a few friends were all on a transcendental meditation retreat in India. According to Lennon, she was “trying to find God quicker than anyone else.” When the group wasn’t searching for God during their retreat, they were channeling their focus on songwriting and wrote the majority of the White Album while on this trip.

The White Album is composed of many of the songs from the Esher demos. The demo songs are legendary because they provide a stark contrast to the formal recording, which was notoriously fraught with hostility among band members. To name just a few infamous conflicts, Ringo quit the band for two weeks because he felt unappreciated, John caused tension by bringing Yoko Ono to every single recording (something that had previously been kept fairly private among band members) and George brought in Eric Clapton to play guitar for "While My Guitar Gently Weeps" because he felt his band mates weren't taking the song seriously. None of this tension exists on the Esher demos. According to Rolling Stone, “the vibe is friendly — it’s like the White Album minus the hostility, which might mean it’s nothing like the White Album.”

The band’s strife during the months spent recording the White Album took a heavy toll, and this album is often regarded as the beginning of the end for the band. In an effort to keep it together, John, Paul and George sent a message to their briefly estranged drummer (Ringo was off living his best life on Peter Sellers’ yacht in Sardinia) telling him he was the greatest drummer in the world and they loved him. As an added gesture of goodwill, Mal Evans, The Beatles’ longtime road manager and personal assistant, decorated the studio and Ringo’s drum set with flowers to welcome him back. It’s a testament to their talent that even in the midst of a crumbling dynamic, The Beatles still created an album so iconic it hasn’t lost its appeal even after 50 years.