Grey matter. In terms of the brain, it’s part of what separates us from other, less-cerebral animals. 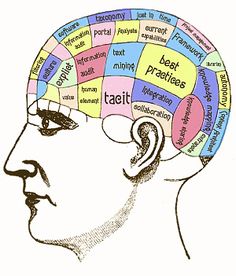 Grey matter. In terms of the brain, it’s part of what separates us from less-cerebral animals. Non-mammals don’t have any grey matter, and though other mammals do, it’s much smaller and less impressive. While “grey matter” is often used synonymously with “brain,” it refers to a distinctive portion of the human brain — the neocortex — which accounts for about 76% of the brain’s volume.

Here’s why it, ahem, matters. Grey matter is the “thinking” portion of the brain. It has a lot of heavy responsibilities (memory, language, perception, conscious thought), and it accomplishes them at insane speeds. At a 2014 workshop, “The Evolution of the Neocortex: How Unique Are We?” a group of 30 scientists came together for an intense discussion (a nice way of saying they got in a fight) about whether or not humans are special snowflakes when it comes to verbal communication.

On one side of the debate, scientists claim language isn’t exclusive to humans because birdsong reflects all the traits required for language learning. On the other, slightly less scientific-sounding side, scientists say that language occurs in the neocortex and birds don’t have a neocortex, therefore humans are unique. And don’t say we’re not!

Historically, humans have been a bit obsessed with being the center of attention (see: geocentric theory and Galileo’s house arrest). This makes the idea that science might once again prove that we’re not so special hard for some to accept.

Controversy aside, our grey matter itself is definitively different from all others. A single gene — the “Big Brain” gene — is responsible for this. Full disclosure: we did share this bit of DNA with Neanderthals and Denisovans, but they’re extinct so their grey matter doesn’t matter. This gene allowed for exceptional growth of the human brain — giving it the capacity to form 101,000,000 pathways. Despite our Big Brains, such a huge number is difficult to process.

Our pathways are formed among billions of neurons, and they form fastest in babies. By age 2, a child’s brain has twice as many neural connections as an adult’s brain. This rapid-fire development is necessary because babies must process an incredible amount of new information in a relatively short time frame. As we age, many of these connections are deemed either incorrect or irrelevant, and being the efficient worker it is, the brain deletes them to make room for better information.

Speaking of better information, here are a few brain myths we’d like to bust:

Congratulations! Reading this has established new neural connections in your brain, so you are even smarter than you were five minutes ago.