Sex and Politics and Religion (Oh My!): Three Topics You Aren’t Allowed to Talk About and Why You Should Absolutely Talk About Them

It often seems natural to break the ice with small talk about weekend plans, how cold it is outside or who won the big sports-ball game yesterday, but do any of these things really matter? If we’re being honest with ourselves, which should always be the goal, the answer is no. These conversations are meant to be time wasters, and the likelihood of anyone reflecting on a two-minute tête-à-tête about Team A wearing the all-white uniforms instead of the black on white last weekend is virtually nonexistent. The topics are familiar and comfortable but boring and cheap — basically the Chicken McNugget of chat.

So why are the most important, impactful subjects also the ones we try the hardest to avoid? That’s the question Covalent Logic founder and president Stafford Wood presented during a recent talk at the University of Oklahoma Gaylord College of Journalism and Mass Communication on the three topics deemed unsuitable for polite discussion: sex, politics and religion. And of course, the irony of barring these subjects from everyday conversation is that they carry more weight in regard to how we live our daily lives and view the world than just about anything else — definitely more than Team A’s jerseys. So this month we will delve intrepidly into these taboo topics to explore the reasons why people avoid them and why they absolutely should not be avoided. 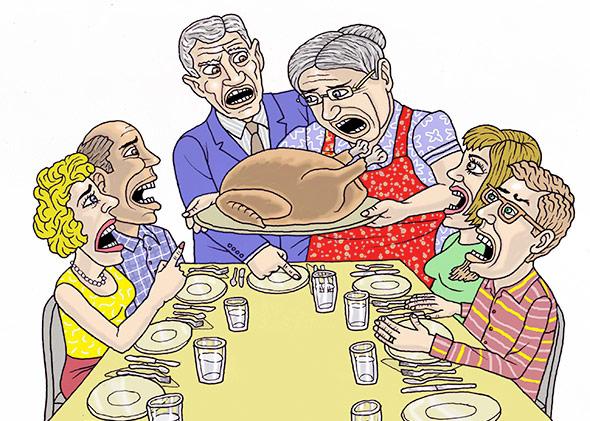 We Need to Talk

Think about it: sex is the relationship between you and love, politics is the relationship between you and society and religion is the relationship between you and spirituality — or, as Wood describes them, “Together, these are love, peace and happiness; these are the only things I care about.” And can you truly understand someone else, or even yourself, without knowing where the lines are drawn with these subjects and why? Because our views on these topics are so central to our own identities, there is an inherent tendency to seek others who share and reinforce them while guarding against those who don’t. But this is the equivalent for your mind, your heart and your soul of sticking to a strict McNugget diet — without real substance and variety, limiting yourself to something that feels nice and comfortable can be detrimental in the long term.

We often won’t share our true opinions until we know how the other party stands on the issue, especially among strangers or acquaintances, but this should not be the case. One of the most important first steps to begin having conversations about sex, politics or religion is to find a worthy person to challenge you, which means finding someone you love and/or respect. This can be as simple as starting with, “Hey, I really respect you, and I want to understand you better.” And, while it is possible to talk around controversial subjects without knowing the other person’s position — and vice versa — it usually isn’t easy to learn another person’s true thoughts on the matter without showing your hand first.

Of course, this all seems easier said than done when moving on from those you know to strangers and acquaintances, but there are actions you can take to give yourself a better chance for success. Most get into discussions or arguments to either confirm their own views or to convince another party to embrace them, but having your ideas challenged lets you see their strengths and weaknesses to assess their value. After all, the ultimate goal is to find truth.

Talking with people who do not share your beliefs can give you a better understanding of where they are coming from. We all have preconceived notions of what others believe, but if you take the time to dig a little deeper, you will likely find that the caricature you created in your mind does not match the reality — the country club Republican may strongly support the right to bear arms, but she’ll likely balk at the idea of someone showing up strapped like Rambo for a game of squash. And even the staunchest proponent of a woman’s right to choose might hesitate at the prospect of terminating a viable pregnancy.

But where are these lines drawn and why? If you can understand that, you’ll see that people never seem to fit in the boxes we unconsciously create for them — and that’s a good thing. And again, if you want to have authentic conversations and break down those barriers to find out who a person really is, you’re going to have to take the first step by letting your own guard down and telling them exactly who you are. Self-identify at the beginning of a conversation without waiting to be asked and let your views be known right off the bat — not only does this save you from someone inadvertently trampling all over your beliefs because they think they are in likeminded company, it also gives you the opportunity take control of the conversation by leading it.

And, if you do happen to touch a nerve when discussing these sensitive topics, don't let the conversation end just because things turned unpleasant; this will almost guarantee that you will never be able to revisit the topic with that person again. Instead, take a step back and try to see things from their perspective. This doesn’t mean expressing support for their views, but a little empathy can go a long way. Ultimately, most people aren’t actually afraid of disagreement; they are afraid the beliefs that constitute their identity will be ridiculed and dismissed.

On that note, if you got a bit salty at the start with talk about how unimportant sports-ball might be in the grand scheme of things, we understand completely and thank you for having the patience to stick it out all the way to the end. But the next time you start chitchatting about the big game, try throwing in a little politics between Bama insults — you just might score big.