Mercury: For God and Planet

His name (allegedly) came from merx, the Latin word for merchandise, and he was considered to be the cleverest of all the Olympian gods. But whatever his etymology and street rep, it’s fortuitous that Mercurius, aka Mercury, was fleet of foot, for the Romans kept him spinning a lot of plates. He was, among many other things, the god of shopkeepers, merchants and transporters of goods (primarily grain and corn) as well as the god of travelers, thieves, tricksters, translators, communicators, good fortune, wealth and fertility.

And along with his Greek counterpart Hermes, Mercury was also a revered psychopomp (the individual in charge of accompanying the newly dead to the afterlife). 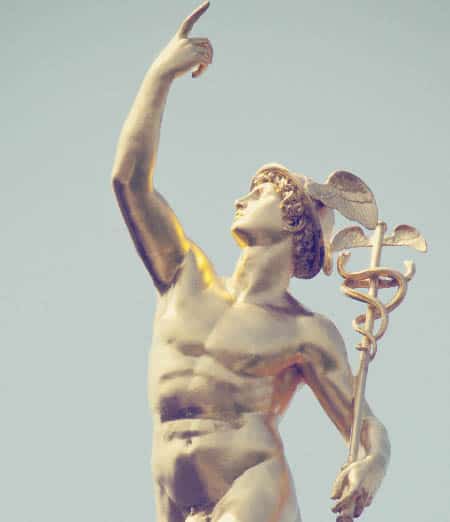 Because his job required acting as liaison among residents on high, on earth and in limbo, Mercury is often depicted sporting winged sandals and cap while carrying both a caduceus (staff) and purse (a nod to his association with merchants and commerce).

And like a lot of ancient Romans, he was also depicted as nude. We assume it was to cut down on wind resistance.

Although Mercury entered the god line-up a century late, his legendary status was so influential he was readily accepted into the culture of other countries Rome conquered during its heyday.

However, his reputation as a multi-tiered messenger was second only to that of Lothario. Mercury’s torrid affair with Venus resulted in a child, Hermaphroditos, who somehow managed to merge the genitalia of both sexes together. But among his many lovers, Mercury’s main squeeze was the water nymph Larunda, who bore him two children and stirred up so much family drama she ultimately had her tongue cut out by Jupiter (Mercury’s dad!).

Despite his good points and important responsibilities, let’s not forget Mercury was the god of thievery and trickery, with many of his exploits illustrating his impish and often cruel behavior.

One such tale relates that after being caught cattle rustling, Mercury swore the sole eyewitness to silence. To test the man’s secret-keeping abilities, Mercury changed his appearance, approached him again and offered a sweet deal on the herd. Unable to pass up the offer, the man was all too happy to relate the story of theft to this affluent stranger. It was then that Mercury revealed himself and as punishment for spilling the beans turned the man to stone. Ouch.

Another account demonstrated Mercury’s loyalty to his father. After being caught in an affair by his wife Maia, Jupiter attempted to cover up his indiscretions by changing his lover into a cow. Maia was wise to him and sent the hundred-eyed beast Argus to find the woman among the herd. Desperate to avoid his wife’s wrath, Jupiter sent his son to bail him out. While listening to Mercury play his pipes and tell boring stories, Argus fell asleep — allowing Mercury to murder the monster — and thus helping Jupiter’s paramour to escape.

With his name attached to an element, spaceship and an olio of others, it’s obvious that more than 1,700 years later Mercury’s notoriety looms large.

Unfortunately, Mercury the planet is nowhere near as diverse or entertaining as Mercury the god.

With little Pluto’s loss of status, Mercury is now the runt of the litter. It’s the second densest planet (and by densest we mean compact and not unable to get the joke). And, despite being the closest to the sun, it’s only the second hottest.

However, since Mercury’s year is only 88 days long, its speedy rotation is undoubtedly the very reason the Romans named it after Mercurius.

It’s moonless and ringless and due to getting smacked repeatedly with comets and asteroids, it has more craters than any other planet.

It has virtually no atmosphere and with temperatures ranging from 800° F to -279° F, you can forget about any thoughts of inhabitation.

Another downside is that one Mercury day equals 176 Earth days, which would make dinner with the in-laws nothing short of torturous.

But on the lighter side, if you weighed 220 pounds here, you would only weigh 84 pounds there. So, move to Mercury and enjoy that second helping of cake.