Few films are as adored — and analyzed — as The Wizard of Oz. And few pieces of cinematic history are as iconic — and treasured — as Dorothy’s ruby slippers. While the actual number of pairs created for the movie is debatable, the value is not, as one pair sold in 2000 for $666,000.

But what few cinephiles may know is that the slippers in L. Frank Baum’s fanciful novel were silver and not ruby, thanks in part to the Populist Movement. Beginning in the late 1890s, America’s blue collar workers felt they were getting the fuzzy end of the lollipop and organized against the top 1%, demanding greater equality in wealth distribution (sound familiar?). As a result, symbolism reigns supreme throughout Baum’s book, with Dorothy representing the disenfranchised masses, the scarecrow as the farmer, the tin man as the factory worker, the yellow brick road as the gold standard of the time and the evil witch as the privileged few who seemed to have the lion’s share of resources and influence over law enforcement. One demand of the Movement was to add silver into the mix alongside gold (to bolster the economy and keep inflation at bay), So Baum, in symbolic support of the average American, decided to make Dorothy’s slippers silver. 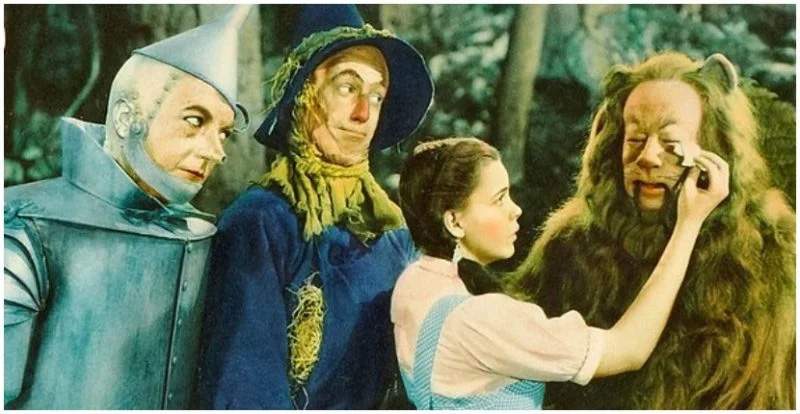 The punchline is that the studio’s decision to change their hue was technological rather than political or financial. Technicolor was coming into its own by the late 30s, and Hollywood was quick to showcase its brilliance in films such as Gone with the Wind, the Adventures of Robin Hood, Snow White and Fantasia. As filming on Oz got underway, MGM realized that because her shoes were such a key player in the plot they should really pop (or click). And silver slippers — even on the silver screen — did not. So, they opted for the most brilliant color possible and 5,000 sequins later, they got their wish.

As Paul Harvey would say…and now you know the rest of the story.