Big Bangs, Births and Other Business: Show-Stopping Events That Started in 1919

Whether humble or historic, in terms of beginnings 1919 was a doozy. From companies to celebrities to amendments to abolishments, they’re all worthy of note.

Two others worth mentioning:

YouTube sensation Arlene Cody Bashnett: Along with her sister Genevieve Musci, Arlene amassed more than a million social media followers as the “youthful” half of the profanity-laden duo, Gramma and Ginga. Sadly, Genevieve passed away in 2020 at the ripe young age of 106.

Navy cook and American hero Doris Miller. Despite having no training in weaponry, Miller manned an anti-aircraft gun during the attack on Pearl Harbor. For his valiancy, he became the first African-American to receive the distinguished Navy Cross.

Fourteen Points later, this concord put an end to the First World War between Germany and well, everybody. To determine its terms, the Paris talks were held. Yet while 30 countries were represented, the “Big Four” (Italy, France, Britain and the U.S.) dominated the conversation. During this time, Woodrow Wilson introduced his ambitious vision for the future of the world, known as the Fourteen Points. Among them were his recommendations for forming the League of Nations to act as an international mediator, the reduction of global arms and the unfettered navigation of all waters to all countries.

The treaty also brought insult on top of injury to the defeated Germans, levying fines to the tune of $33 billion dollars (Many surmised that had Germany made good on its payment, it would have brought economic collapse throughout Europe). The country’s outrage at being stuck with the bill caused the establishment of radical nationalist groups that eventually united to become the Nazi party. 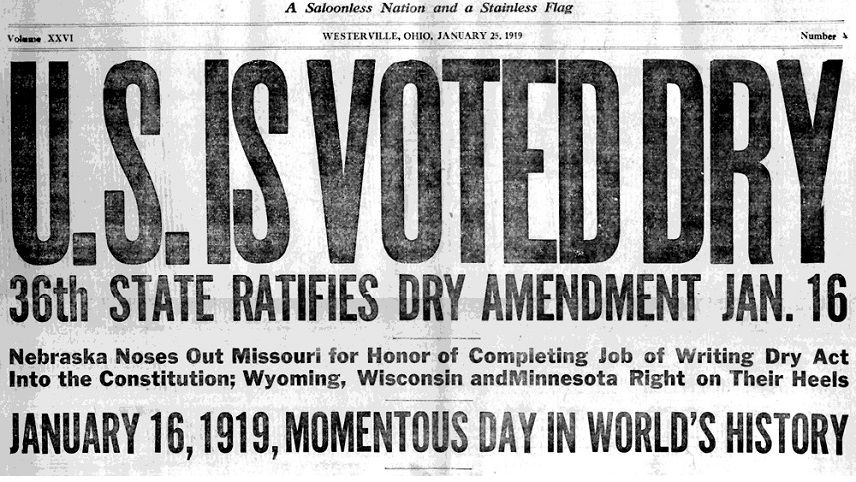 To find out the fascinating and unbelievable turn of events Prohibition created, we recommend the Ken Burns’ documentary. Until then, we’ll give it a shot.

Drinking has been a part of life since fermented grapes first piqued our curiosity. And for a couple of thousand years (for the most part) alcohol production and consumption had gone unchecked, unrestrained and unregulated.

But beginning in the late 1800s, temperance groups had been pushing its abolishment and after 30 or 40 years of nagging and influencing the right lawmakers, the 18th Amendment was ratified. Met with great resistance and nearly impossible to enforce, the Prohibition era ushered in not only moonshining, bootlegging and speakeasys, but some of the most ingenious of ways of concealing their distilleries (such as retrofitting the soles of shoes with cow hooves so moonshiners could move about their countryside still without leaving footprints) and hiding their hooch (which ranged from hollowed-out Bibles to the inside of pig carcasses). Along with the rise of American ingenuity came a rise in violence, police corruption and organized crime. While a disastrous mess, Herbert Hoover considered it “a noble and great social experiment.” Which is probably why FDR defeated him in 1932, making sure the 21st Amendment overtook the 18th and celebrating it all with his favorite libation, a dirty martini.

In 1919, after honing his entrepreneurial skills working in his father’s general store, a young Conrad Hilton sought to cash in on the oil boom by purchasing a bank to house black gold profits. But wisely seeing that housing roughnecks could be more beneficial, he instead purchased a 40-room hotel in Cisco, Texas. With rooms turning over as often as three times a day, Hilton converted the hotel dining room into additional rooms to meet the demand. A few years later, he put his name on the first official Hilton Hotel in Dallas. And today, Hilton is a leading global hospitality company with a portfolio of 18 brands and 6,300 properties in 118 countries and territories.

Few corporations of this size have humbler beginnings. For when Willian Bernhard first opened his plumbing and sheet metal works shop in Baton Rouge, little did he know that over the next century it would grow into one of the largest American-owned engineering, mechanical and electrical construction providers in the world, with more than 3,000 employees handling beaucoups of billion-dollar projects.

With General Electric in charge, this new venture quickly became a pioneer and dominant presence in A pioneer in the fast-amplifying radio industry. Over the years, RCA expanded into phonographic records, motion pictures and television. Forever synonymous with color TV, RCA’s “His Master’s Voice” trademark to plug the Victrola became one of the most recognizable images in advertising.

Speaking of motion pictures, in a defiant effort to give actors more control of their own destiny, Charlie Chaplin, Mary Pickford and Douglas Fairbanks — the three biggest and most bankable stars of their time — broke away from the big guys, and formed the studio that gave us Annie Hall, Rocky and The Spy Who Loved Me.

Other “it all started way back in 1919” notables include:

The Tandy Corporation which somehow turned leather-goods into Radio Shack 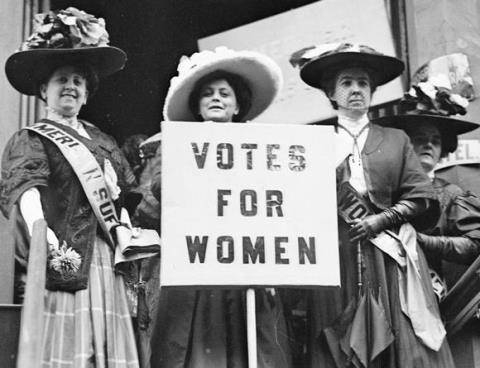 It took nearly 40 years of diligence, but this acclaimed amendment proclaimed that no state nor federal government could deny women the right to vote.

While women of all ages, colors and backgrounds were united in this endeavor, their efforts to be heard differed wildly, ranged from court challenges to mass protests to hunger strikes. Along the way many suffragettes suffered threats, physical abuse and imprisonment. But slowly, state after state embraced the cause. And once New York came on board, Woodrow Wilson (and the rest of any remaining political resistance) acquiesced.

We know it goes without saying, but considering there was ever a time women were forbidden to vote boggles the mind.